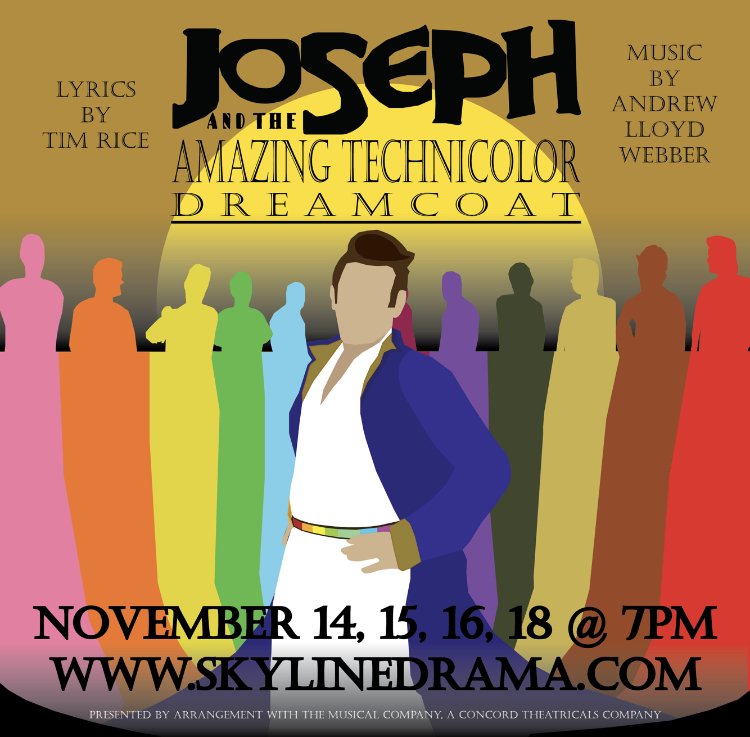 From November 14 to November 18, Skyline High School produced a production of “Joseph and the Amazing Technicolor Dreamcoat”. The play stars Isaac Murdock as the main character, Joseph, alongside Maggie Chamness, Eleanor Considine, and Sasha Wilkinson as the narrators. Rehearsals for the play began in mid-September, but stage crew started their preparation around the first week of November.

Isaac Murdock, the lead of the play, is a junior at Skyline High School. He has been acting for as long as he can remember and has been in numerous productions at the Salt Lake Conference Center, Olympus High School (when he was younger), and played Rolf in “The Sound of Music” at Skyline in 2018.

Murdock says that his favorite part of “Joseph and the Amazing Technicolor Dreamcoat” was the cast. “Everyone in it is working so hard,” he stated in a recent interview. “This show wouldn’t be what it is without the amazing ensemble. Everyone plays a vital role in the show…” Stage crew members have praised Murdock for his kind and respectful nature towards them. In Murdock’s words, “It’s not just the actors, we have an amazing stage crew, a fabulous orchestra, and incredible directors,”

Overall, the musical was a fun and energetic experience. Murdock’s powerful voice complimented his character’s strong-willed personality perfectly, while the narrators’ effortless harmonies brought the story together seamlessly.

In a musical production, there is an incredible amount of effort put into the preparation and the final performances. Drew Carroll, the Assistant Prop Master, is one of the many members of stage crew that have put amazing amounts of effort into preparing for the musical. Carroll stated that the most difficult part of the preparation for the musical was building the set because of the lighting and wiring that needed to be done before rehearsals even started. In the end, the stained glass-looking set pieces lit up the stage with every color in Joseph’s coat, only adding to the experience. Carroll’s favorite part of the musical to watch from backstage is the song Canaan Days, because “our actors’ performances are hilarious and perfect for it.”

The story of “Joseph and the Amazing Technicolor Dreamcoat” revolves around Joseph, the son of Jacob. Joseph is the favorite son and is given a beautiful coat made up of every color you could imagine, sparking jealousy among his 11 other brothers. They originally plan to kill Joseph, but end up selling him to some Egyptians passing by as a slave. Joseph is a dreamer, and has the ability to interpret other people’s dreams as well. This lands him a place beside the Pharaoh. Eventually, Joseph’s brothers realize their mistake and mourn the loss of their brother.

Isaac Murdock would like to thank everyone for their support and kindness through the journey of getting the musical from script to stage.