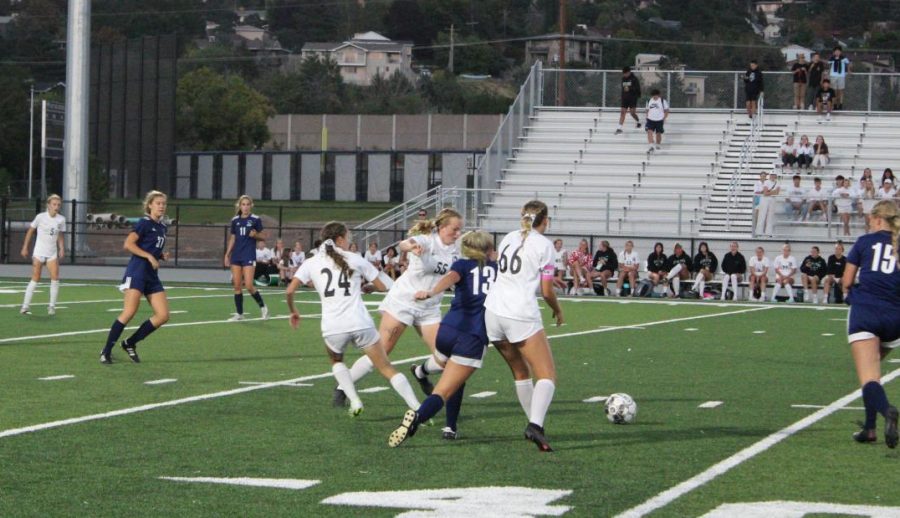 During the game Ali Swensen scored four goals. Swensen stated, “I thought that the game went really well. We won seven to one and I thought it was really great because our team played together and there wasn’t anyone who struggled.” Swensen felt that this game was one of their better ones because everyone worked together as a team. This allowed them to make more goals and deflect Murray’s attempts to make goals. Swensen was happy with the game, saying, “ I got a lot of goals and usually I’m not one to get many goals and so it was great to put so many in the back of the net.”

Brianna Frey was the goalie for Skyline in the September 20 game. She caught many balls heading for the goal. Sitting in the stands, you could hear many shouts of encouragement for Frey. Frey said that the secret of her success was, “As a goalkeeper, I talked to my defenders a lot. I controlled my seconds and my control was pretty decent too.” When asked about the game on Tuesday, she said that the Murray team didn’t play as well as they have been. “I thought that we had one of our better games. I thought that [Murray] didn’t have that energy that they did the first time we played them.” Both team members felt that the Murray team had lost some of their gusto from the first time they had played them.

One of the players from the Skyline team, Jenna Nickolas, echoed her teammates’ statement. “We definitely just brought out our best game against them and they couldn’t really combat us the second time around.” The team felt that they were good at working together, and that they played to each other’s strengths this game. The Murray team had come out very strong this season, making Skyline players feel like they needed to bring their A game to the field. Coming into the field the Skyline team felt that they worked hard to score goals while working together as a team. Despite the defeat that Skyline gave them, Nickolas still respected Murray, saying, “I think that they are a really good team.”

There was some friction against the two teams. There were players always next to each other trying to get the ball for their team. During one of these, a player from Skyline and a goalie from Murray ended up crashing into each other. The Skyline player landed on the Murray goalie’s head. Once the two players were untangled, the Murray goalie pushed the Skyline player. The team was penalized and given a yellow card. The Murray goalie was pulled from the game, and substituted with another goalie.