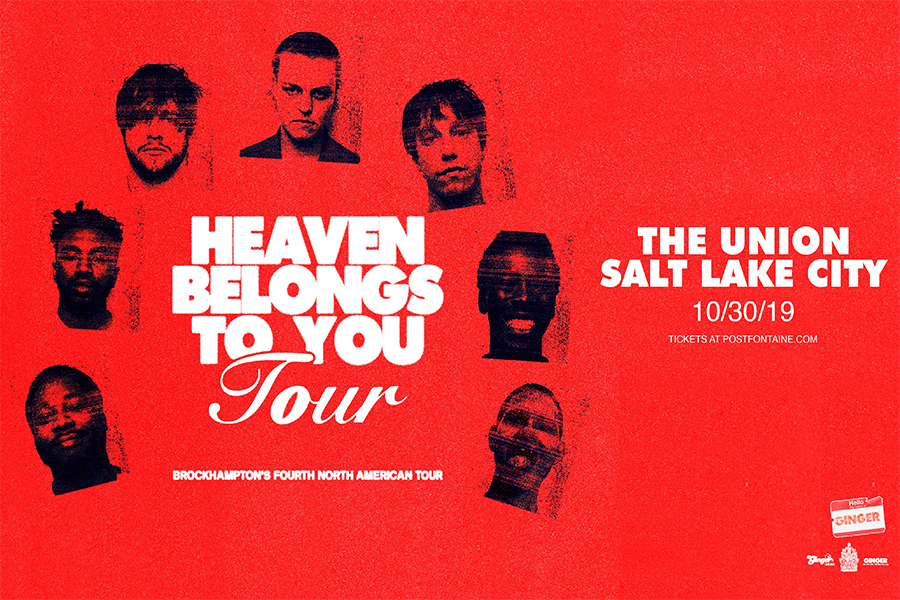 BROCKHAMPTON, a Los Angeles-based rap collective and self-acclaimed boy band, brought their fifth tour to Salt Lake at the Depot on the night of October 30. The “Heaven Belongs to You Tour” follows the release of their newest album, Ginger. This tour is BROCKHAMPTON’s second time in Salt Lake.

The band consists of six members; Kevin Abstract, Matt Champion, Joba, Bearface, Dom McLennon, and Merlyn Wood. For this tour, they’re all sporting white tees and shimmering orange overalls—a throwback to the Saturation album era. The stage has a huge cross overhead the band, tying into the Gospel-themed aesthetic of Ginger. In the center of the stage sits a large couch, one of BROCKHAMPTON’s trademarks, which is also included on shirts and hoodies at the merchandise booth.

100 gecs opened for BROCKHAMPTON, with the two members, Dylan Brady and Laura Les, wearing Halloween costumes. The duo is an experimental group, creating a unique, techno-pop style. After 100 gecs, BROCKHAMPTON opened with a blackout and Rihanna’s “Stay”, which had the entire room singing along. One by one, the band came out to perform their verses of “ST. PERCY,” off Ginger.

The GA pit seemed to jump in unison during their wildest songs, like “BOOGIE” and “ZIPPER” — many of the people were drenched in sweat, even though it was the coldest October Salt Lake has seen in years. “It was insane,” said Ali Larsen, who attended the concert. Security guards walked around in front of the pit and passed water around. Those in the crowd shared water with both friends and people they didn’t know.

BROCKHAMPTON is also known for their casual meetings and conversations with fans, and sure enough, as the crew cleaned up and closed the venue, Kevin Abstract and Matt Champion came out to talk with fans and take pictures. Kiko Merley and Romil Hemnani, two of their producers, accompanied them. Kevin thanked the fans for purchasing merchandise, took pictures, and hugged them.

BROCKHAMPTON’s show was one of the most interactive and fun concerts Salt Lake has seen in a long time. The band had the whole room jumping, the crowd smiling, laughing, and crying. “It was one of the most intense concerts I’ve ever been to, but it was worth it,” Ali said. Fan’s gifts that were thrown on stage were immediately picked up, with Joba wearing a halo during “SUGAR” and Kevin taking pictures on stage with a fan’s disposable camera.