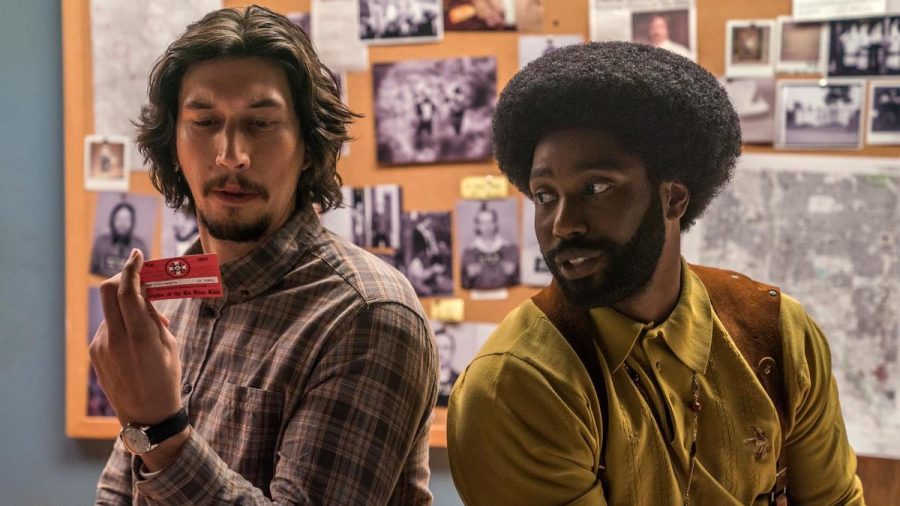 BlackkKlansman is based on a true story during the 1970s where Ron Stallworth (John David Washington), the first African-American detective in Colorado Springs, infiltrates the KKK with the help of his partner Flip Zimmerman (Adam Driver). Stallworth becomes a licensed affiliate of the KKK through the help of an undercover Zimmerman.

Zimmerman acts as Stallworth’s physical embodiment in the KKK, as he tries to integrate safely into their cult as a Jewish man without being found out. At times, the suspense between Zimmerman and the Klan mounts with the unabating interrogations and leaves the audience completely petrified.

Directed by Spike Lee (Do the Right Thing, 1989) and produced by Jordan Peele (Get Out, 2017), BlackkKlansman masterfully walks the line between drama, comedy, and sickening horror.

The film opens with a scene from Gone with the Wind, then cuts to a member of the KKK (cameo by Alec Baldwin) spewing neo-Nazi rhetoric which gives the viewer a small taste of the extreme hate-speech present in the rest of the movie. This movie explores all sorts of topics that are relevant today such as police brutality and white supremacy in the political world, but that is not the main point Lee is trying to make.

The opening scene can be quickly overlooked or forgotten about, but it makes an incredible point: white supremacy did not just die off after the Civil War. The use of Gone with the Wind in this opening scene is incredibly powerful as it shows a reality that America wants to bury.

Gone with the Wind won an Oscar in 1940 and, despite being known (even in 1939) for being inherently racist, Rotten Tomatoes still gives it a 92% combined score. This is what BlackkKlansman highlights so well. The juxtaposing images, scenery, and dialogue to give the viewer a complete idea of what Lee is trying to say — racism is still prevalent in America.

An example of the juxtaposition that represents this theme has got to be one of the most unsettling scenes in BlackkKlansman.  At this stage in the film, the mood had completely changed from dark comedy to thrilling imagery.

Just one scene before, the audience is laughing at the witty jokes positioned for comedic relief, and the next moment is left horrified, disgusted, and speechless. The segment begins with Stallworth’s girlfriend, Patrice (Laura Harrier), attending a Black Student Union meeting where a man, Mr. Turrentine (Harry Belafonte), shares his memory of The Waco Horror.

The Waco Horror was a significant event in American history where a black teenage boy, Jesse Washington, who was on trial for murder, was kidnapped by a mob and tortured to death instead of being executed according to the law in Waco, Texas, 1916.

Turrentine recounts crowds forming in celebration as the teenager was tortured, tied up, and burned alive for sport. People in the crowd savagely mutilated his body while he was still alive and threw him into a box after setting him ablaze.

The scene quickly switches to the quasi-baptism of an undercover Zimmerman into the KKK — holy water splashing onto his white hood. Tensions rise as pictures of Washington’s corpse mix with the Klan’s viewing of Birth of a Nation. The newly initiated klansmen ravenously shout slurs and hurl popcorn at the screen while they laugh safely within their content cult.

The scene ends by switching between the two groups screaming white power, black power, over and over again. This powerful comparison leaves the audience in silence with chills.

Though BlackkKlansman was unbelievably accurate, the one thing that felt strange about this movie was the commentary and almost glorification of police. As a member of the Colorado Police Force reveals himself to be a racist who feels he can take advantage of any minority, the rest of the police force does not report him because they are a “family”.

I was unsure whether Lee was making a connection between police and white supremacy, saying that African-American officers will go out of their way to fit in, or if he was trying to glorify police by highlighting their achievements instead of wrongdoings. This theme of conflict of police persists throughout the whole movie, and by the end made it seem as if all policemen were restored to non-bias law enforcement officers that only want to reform society. There were many moments that indicate the wrongdoings of the police, but it never really felt as addressed as the rest of the topics were.

Overall this movie was true to everything it was trying to be. There were so many layers of commentary and themes that had never been shown before such as normalizing hateful rhetoric to fulfill a political agenda, which is very real in the context of modern life.

From the writing to the acting, BlackkKlansman never felt rushed or unpolished. Washington’s performance was incredibly accurate to the real Ron Stallworth’s accent and distinct style of talking. Driver’s ability to remain calm and professional during tense and nauseating moments is astounding. Though the story of this movie seems far-fetched, the plot remains extremely realistic and tasteful.

BlackkKlansman drives the point that America really has not progressed much since the Civil War, the ‘50s, or even ‘70s because society allows for the KKK to flourish in the most important stations in life. America has a long way to go before moving beyond deeply ingrained racism and violence towards black people. If any of this sounds intriguing, go see BlackkKlansman.