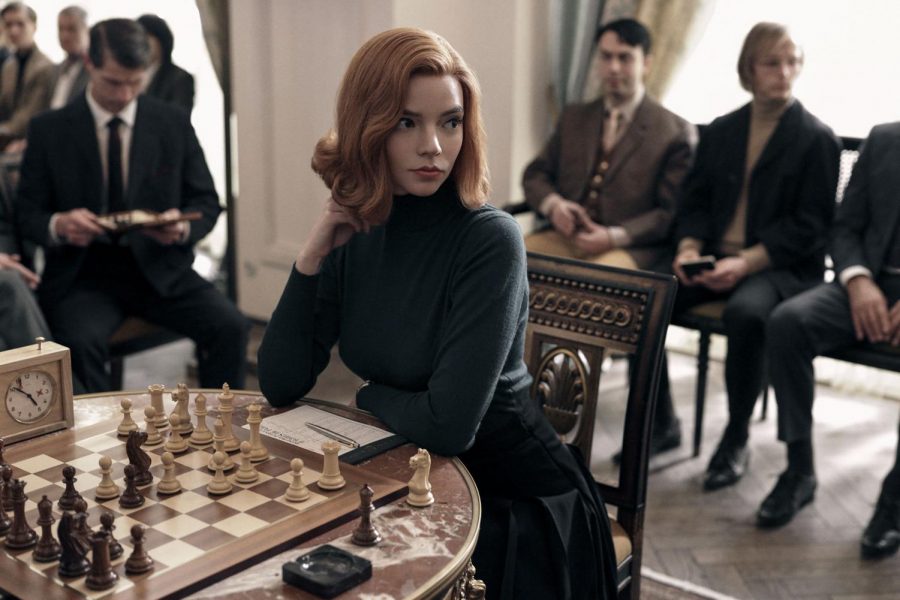 On October 23, 2020, an earth shattering Netflix series was born. Set in 1983 and based on a novel by Walter Tevis, The Queen’s Gambit, follows the brilliant chess player, Beth Harmon, played by Anya Taylor-Joe, through her adolescence and young adulthood. The show has curried much acclaim among viewers, earning 97% on rotten tomatoes; since it’s rise in popularity, there has been a surge of chess board sales in the United States as viewers take a more active interest in the story.

At a young age and early on in the series, Harmon is put in an orphanage after her mother’s sudden death. At the orphanage, it is quickly apparent that she is a chess prodigy. In the basement where she goes to beat chalkboard erasers, young Harmon meets the school janitor, Mr. Schaible, who plays chess alone each day. She is instantaneously intrigued by the game and urges him to teach her.

Sadly, while living there, chess is not the only life altering discovery made by Harmon. Like many real life orphanages in the late 50s and the early 60s, this one used tranquilizers to calm the children. Harmon becomes addicted to tranquilizers given to her and uses them at night to help her visualize chess moves on the ceiling- but her addiction doesn’t stop there. Through the story Harmon not only relies on tranquilizers, but also alcohol which she discovers at the age of fifteen.

Director Scott Frank uses Harmon’s struggles to show that a brilliant mind comes with a price; he often hints that the price could be a character’s sanity.  Through Harmon’s troubles, the cost of mastery comes to life. Harmon is obsessed with the game. It becomes the center around which her life revolves; chess player Harry Beltik says in episode 5, “I’m not obsessed with it the way one has to be to win it all. The way you are.” She must sacrifice every moment she can in order to become good enough to beat her increasingly skilled opponents. A consequence of her obsession lies in her struggles to be understood. She is often left alone, craving human connection. Then there is, of course, the struggle of her addiction. Harmon believes that she needs tranquilizers in order to focus and alcohol, in some ways, becomes her coping mechanism.

Harmon is privy to a life that is most often out of her control. She watches helplessly as both her biological and adoptive mothers die before her and she is thrust onto paths she would not otherwise choose. The only things she can truly influence are her state of mind and the chess board: “it’s an entire world of 64 squares. I can control it, I can dominate it, and it’s predictable so if I get hurt, I only have myself to blame.”

Despite not fitting in among peers, Harmon makes valuable connections with her competition. Characters D.L. Townes, Harry Beltik, and Benny Watts meet her through the world of chess. They are able to help her truly master the game and make it to the final destination where she could win it all. In turn, she teaches these so-called masters something about humility- beating them with her chess prowess and earning their respect.

Through The Queen’s Gambit, viewers can’t help but root for Beth Harmon, a compelling female genius, an underrepresented trope in the cinematic universe, who must face a society that often views her, not as a chess player, but a woman who happens to play chess. Harmon’s intensity, evolving fashion sense, dark humor, and uncertain future make her easy connect with from beyond the screen.