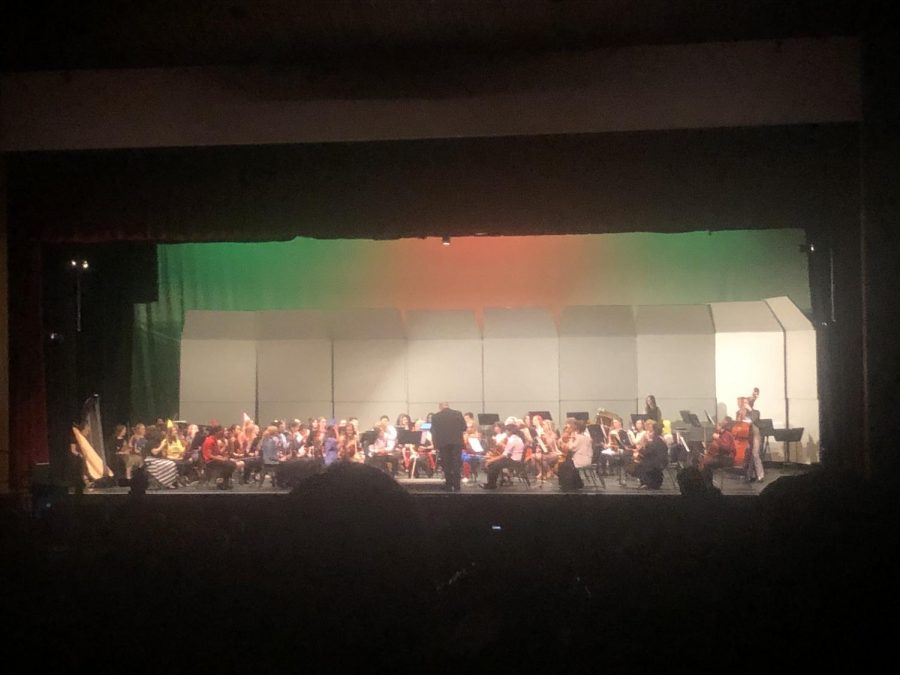 On Tuesday, October 8, at 7:00 p.m., the Skyline Band performed their first concert of the year in the Skyline High School auditorium. The concert was called “A Spooky Fall Concert “ and had a festive Halloween theme. The concert featured Skyline’s Jazz Ensemble, Concert Band, Percussion Ensemble, and Wind Ensemble. The Skyline Band is directed by Adam Larson, the instrumental music teacher at Skyline High School. Upon entering the auditorium, spooky Halloween music like “Monster Mash” and “This is Halloween” were playing over the loudspeakers, readying the audience for a creepy concert.

The first band to play was the Jazz Ensemble. As the group entered the stage, orange and green lights turned on the backdrop. These lights shone off the brass instruments, creating a cozy fall feeling in the auditorium. They began with Pumkinette by Bob Florence, followed by  In the Hall of the Mountain King by Edvard Grief, arr. Duke Ellington,The Sphinx’s Lair by Steve Spiegl, and ended with Moanin’ by Charles Mingus, arr. Sy Johnson.

Concert Band followed the Jazz ensemble. They performed three songs that were perfectly on-theme. They opened with The Haunted Carousel by Erika Svanoe, followed by Of Monsters and Men by Randall D. Standridge, and they finished with Grim Grinning Ghosts by Buddy Baker, arr. Douglas E. Wagner.

Finally, the Wind Ensemble ended the concert. They performed The Raven by Barry Kopez and House of Horrors arr. By Tom Wallace; this was a special medley of many fun Halloween songs. That’s why it was Clara Buchanan, a flutist of 6 years who was a member of the Wind Ensemble’s favorite piece with Autumn Leaves by Joseph Kosma, arr. Alfred Reed, Then they concluded the concert with The Inferno by Robert W. Smith.

The Skyline Band performance was a success in this 2019 fall season and that success came with a lot of hard work. Buchanan said that in order to prepare for a concert “we all work really hard together in class and practice outside of class.” Being in the Skyline High School band comes with lots of responsibilities “Attending pep band, practicing, and participating in concerts,” are just a few of them.“Some members of the band also play in the pit for the school musical.” and the time and energy spent is all worth it for the viewers and performers in the end. Buchanan says she loves being in band because “it’s so much fun to be part of a group with other people who love music as much as me.” Already, the Skyline Band is working hard on songs for their next concert, which Skyline Fans look forward to this coming Christmas.