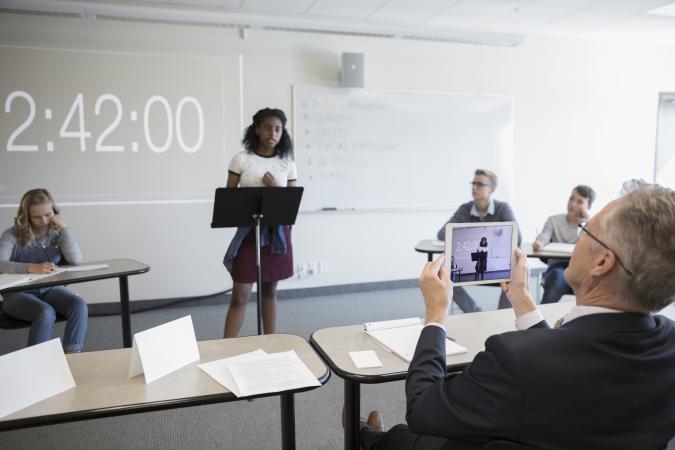 The Skyline Debate team may not be as well known as the Skyline Football team, but they are working just as hard to achieve first place. Skyline has both a debate class and a debate club, but the debate team is expected to spend their own time practicing and getting ready for debates. The club meets after school one to two times a week. Many of the debaters participate in both, but the class has more requirements and is often more rigorous. The debate team is a great place to make new friends because members spend lots of time together preparing.

A normal debate class includes completing assignments, working on lectures, writing flows, and practicing speech. A typical assignment is researching and reading a topic. A flow is like taking notes on another persons lecture. Practicing speech can include speed drills, which is a practice where the person must read something aloud extremely fast.

When asked what her favorite part of debating was, Emily Young, a Freshman who is part of the team, replied “I get to learn about topics in-depth, and I get to argue about what I care about.” She is glad she joined debate and would like to continue doing debate next year. The only thing she dislikes about debate is “how long some tournaments take.” Sometimes a tournament can take up to seven hours, which can fill up a whole day. Debate members also spend anywhere from ten to thirty hours a week participating in debate related activities. This shows their dedication to the Skyline Debate team.

The debate team is off to a good start this year, as they received first place at Skyhawk in small school sweeps. The team has often placed decently high in other debates as well. The Skyline Debate Team is ready for its upcoming tournaments. They have put in a lot of hard work and are prepared to show other schools their proficiency with debate.