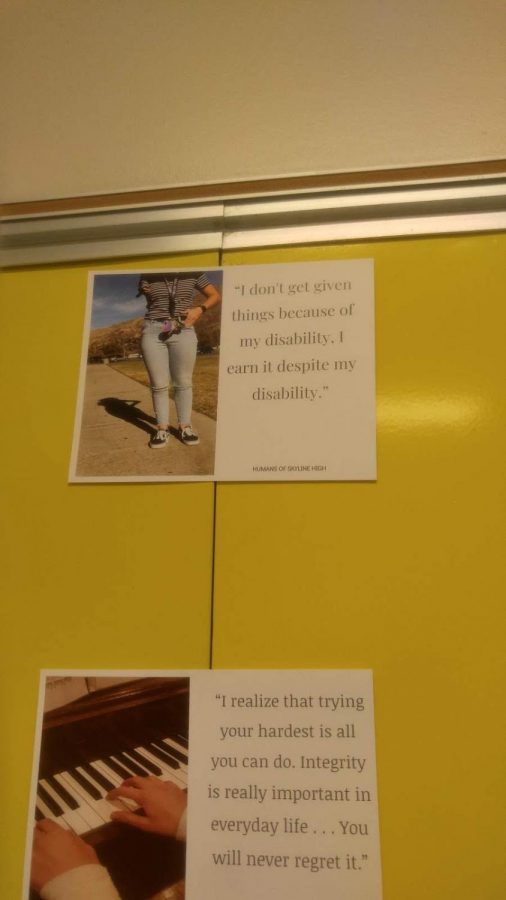 It tells students’ stories by letting them express their thoughts in a semi-anonymous way. According to Ottley, this exhibit was inspired by Brandon Stanton’s “Humans of New York” project and the StoryCorps website. All of these projects take a closer look at students’ unique lives, emotions, and stories.

The students featured were found by Ottley’s seniors; they drew a grade and had to find someone in that grade to talk to. They had a long, 20-minute conversation and took three pictures of their interviewee; from that, the seniors chose one impactful quote and their favorite picture. Most of the interviewees were complete strangers to the seniors, but, by the end of the project, some seniors had gained new friends.

The students’ faces weren’t shown because Ottley wanted to let the students speak without fear of retribution or harassment. That separation from student and picture was important in allowing the spread of true beliefs. Had it not existed, quotes like: “He treated the situation fine, I guess, but I just feel like I’ve heard the excuse a million times before. It just seems to be something he said to all the girls he’s played.” wouldn’t have been said.

This exhibit has had an impact on more than just those directly involved; whenever Ottley passes by the display, he said there’s always someone reading the features. Students are connecting with their anonymous peers.

The general mood of the exhibit is positive: 14 of the 24 could be classified as such. What is a little surprising is the small number of quotes about Skyline, only two. It may be that opinions about Skyline, whether that’s the attitude toward staff, students, or the slowly decaying building, were just not that interesting to Ottley’s seniors.

Unsurprisingly, many of the quotes were about social politics: student’s friends, significant others, and family members. Those featured tended to have a generally positive view of their acquaintances. One spoke of their sister’s respect for their wishes, another about their mother’s positivity. There were a few pessimists in the pack, though, saying that they didn’t like the social environment in Skyline.