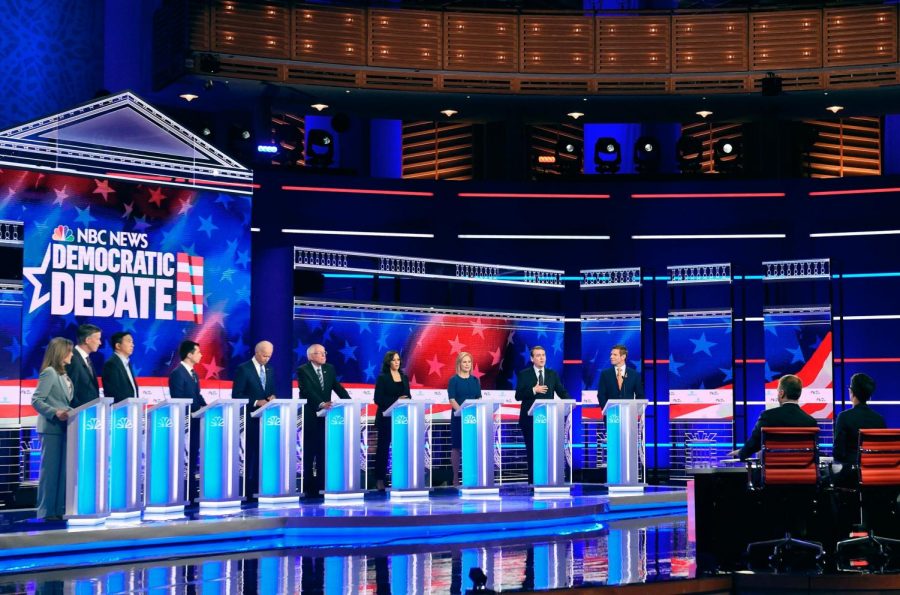 The most recent Democratic political debate took place on September 12 in Houston and revealed the top Democratic candidates for the 2020 presidential election. Candidates who emerged as front runners were Joe Biden, Elizabeth Warren, Bernie Sanders, Kamala Harris, and Pete Buttigieg. The third democratic debate examined their views on issues of health care, gun control, and race. Each candidate presented their own ideologies to sway the population and be deemed as top contenders for the 2020 presidency. The candidates generally supported democratic ideals such as social equality through liberalism, voting and minority rights, and encouragement of multiculturalism and secularism.

One of the most qualified candidates is Joe Biden. This is due to his previous experience serving as vice president to Barack Obama from 2009-2017. Well-known for his ability to connect with the working class, if he is elected, Biden plans to protect and build on the Affordable Care Act. Despite being criticized for his health care plan and his age, Biden still left the debate as a front-runner for the primary elections. Biden shows strong support towards affirmative action policies; for example, he introduced the Violence Against Women Act to the US Congress when he was Senator in 1994. President Barack Obama and Vice President Joe Biden were able to create an economic recovery plan to prevent another Great Depression and energize the employment market.

The runner up to Joe Biden is Elizabeth Warren, a former law school professor and member of the Massachusetts senate. In the most recent debate, Warren left without much criticism. Many believe her to be an excellent candidate because of her concern for the middle class. She supports reworking the justice system to punish all classes and races equally as well as rewrite marijuana intolerance laws. Like all the primary candidates, she wants widespread healthcare and childcare. According to her website, Warren believes in reducing student bills and loans through canceling “debt for more than 95% of the nearly 45 million Americans” being affected by it today. She also supports the “Green New Deal” which involves a plan to achieve net-zero domestic greenhouse gas emissions by the 2030s.  Warren has a stronghold on many Americans and will be tough competition in the coming election.

Bernie Sanders is another well-liked candidate in the democratic party. Currently serving his third term in the U.S. Senate, Sanders is seen as the leading charge for universal, government-provided healthcare with “Medicare-for-all.” As a co-sponsor for the “Green New Deal,” he considers climate change to be the single greatest challenge facing the country.  In the 2016 presidential election, Sanders’ campaign created the standard for the 2020 debate with a target $15 minimum wage and tuition-free college. Additionally, he plans to divide large banks, increase estate taxes, and place a ban on assault weapons. At the September debate, Sanders spent most of his time taking direct aim at Biden. It seems that Biden and Sanders are both fighting over the same voters: lower-income democrats.

Another qualified contender is Kamala Harris, a lawyer and junior United States senator from California with Jamaican heritage. Harris embraces implementing the Universal Healthcare Plan, legalizing marijuana, actualizing the “Green New Deal”, and finding ways to create equal pay for men and women. In the most recent debate, she was recognized for her very scripted one-liner replies that would leave an impact on viewers. However, she mostly played it safe by criticizing Donald Trump instead of her fellow Democratic candidates.

At only 37 years old, Pete Buttigieg appeals towards a younger generation of voters. Buttigieg is currently serving his eighth and final year as mayor of South Bend, Indiana where the economy has benefited from job growth and major investment in technological industries. He also served as a lieutenant in the U.S. Navy Reserve. Buttigieg supports “Medicare-for-all” and is known for his efforts to create resilient communities. Being the youngest of the primary candidates, there is some concern over his low level of experience. Yet, he has more years of government experience than the current president. He is also falling behind in recent polls; this is seen as due to his inability to connect with African American voters. If elected, Buttigieg would be the nation’s first openly gay president.

The fourth debate held on October 15 will be co-hosted by CNN and The New York Times. These debates leading up to the primary election provide a great opportunity for candidates to present their political opinions to potential voters. With each of the Democrat candidates offering benefits to the nation, American citizens anxiously await the outcome of the 2020 primary elections.