Lizzo’s outfit at the Lakers Game Made Heads Turn 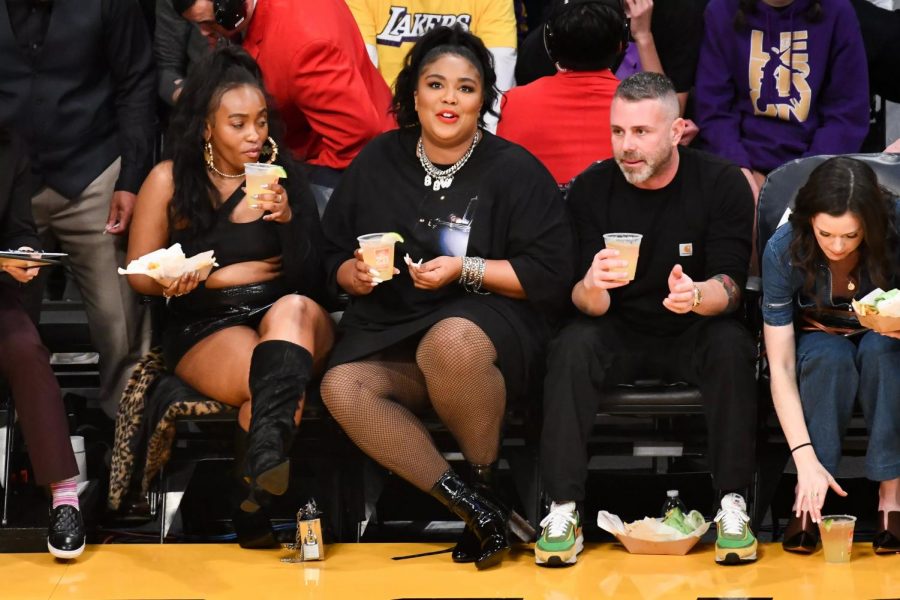 In society today, there is a positive movement to love and embrace yourself for who you are, rather than beating yourself up for who you are not. This movement includes a push to accept and celebrate people with bodies of different shapes and sizes. Along with these changes, restrictions on acceptable clothing for women have eased, meaning that less of society stigmatizes women for showing their skin and embracing different versions of sexuality. These advancements in Women’s rights  are noteworthy and long overdue. In the past, women were often branded with derogatory terms such as “prude” or “slut” based upon their choice of attire, whereas now many women are supported in their choices. While society is moving in a positive direction, the ability to dress freely is perhaps not appropriate in some settings. Have some people taken self love and body positivity too far when they use it as an excuse to defy appropriate social norms?

Melissa Viviane Jefferson, more commonly known as “Lizzo”, is a talented performer and role model. She loves her body and rightly so, however, she went too far in expressing that self love when attending the Lakers game. Like many people, Lizzo enjoys going to basketball games. People of all ages go to watch the sport and cheer on the players. While at this particular game, Lizzo stood up,  with the cameras on  her, turned around and twerked. This would not have been a problem, but the backside of her dress was completely cut out, leaving only a thong to cover her. Lizzo’s music videos, dancing skills, and flute playing are phenomenal and deserve to be shown off during her concerts and videos, however, her choice of attire at an event that is not her concert shows a lack of judgement. Lizzo has the right to wear what she chooses and be treated with respect, but there are certain standards which need to be maintained within public spaces. Many Lizzo stans have voiced their support for Lizzo and her dress, but an unstated dress code exists at sporting events, where families go to appreciate athletic entertainment. Fans of all ages spent money and time to watch basketball, not to see Lizzo’s inappropriate outfit. Some argue that if it had been a thinner woman showing skin then it would not have been an issue, however, if anyone, light, heavy, celebrity, or unknown citizen, had gotten up without anything to conceal their thong covered behind, it would have been inappropriate, unnecessary, and upsetting. So, if it would be equally troubling for others to do it, why should Lizzo?

While in this instance, Lizzo took advantage of a situation to put herself in the spotlight and made an unfortunate fashion decision, she remains a positive influence and represents those who have been underrepresented. In a CBS interview, Lizzo asked, “Do you know how long it took me to fall in love with this body?” She later spoke about how she had come to welcome aspects of herself that she had once hated. Because of the positivity she radiates, she does not deserve hate for this occurrence.