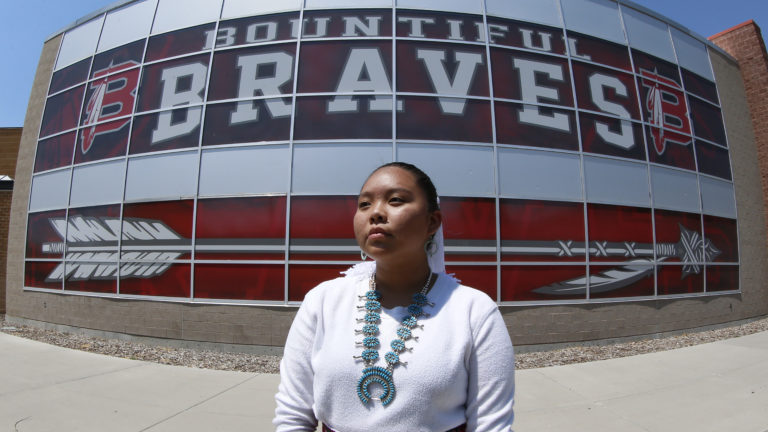 Lemiley Lane, a Bountiful junior who grew up in the Navajo Nation in Arizona, poses for a photograph at Bountiful High School, July 21, 2020, in Bountiful, Utah. While advocates have made strides in getting Native American symbols and names changed in sports, they say there’s still work to do mainly at the high school level, where mascots like Braves, Indians, Warriors, Chiefs and Redskins persist. (AP Photo/Rick Bowmer)

From middle school to professional sports, the use of indigenous people as mascots has long-been a topic of debate in the United States. Recently, there have been many movements in protest of naming teams after Native American people; yet, this could be seen as another way to further erase indigenous people from American culture.

In 2020, Utah’s Bountiful High School voted to no-longer have their mascot be “The Braves.” The Salt Lake Tribune stated that a group of Native American students prompted this change. It should be noted that “The Braves” is a vague term that doesn’t refer to any one group or tribe. However, the issue divided the city of Bountiful. Many viewed “The Braves as a legacy that honors tribes.”

There are obvious situations when mascot names are culturally insensitive. Names such as “The Braves,” “The Redskins,” and “The Savages” are often considered derogatory and racist. Many mascot representations of Native Americans are stereotypical and insensitive.

Using demeaning names and logos to represent multi-million dollar industries is dehumanizing. While it is almost unquestionable that team names that demean indigenous people should cease to be used, it is open to debate whether or not names such as “The Cherokees” and “The Navajo” are acceptable. Certain names are used to represent, honor, and celebrate a tribe’s culture.

Considering the United States’ history, it seems that efforts to make amends for the maltreatment of Native Americans have been largely unsuccessful. For example, Indian Boarding Schools forced Native Americans to assimilate to Euro-American culture and lose their self-identity. This can also be seen with Indian Reservations, which constrained indigenous people to migrate to small, inhabitable areas. This only gave them further incentive to leave their tribe and join mainstream culture. Will removing tribal identities from schools and sports teams just continue to wipe Native Americans from history?

According to the National Congress for American Indians, the National Collegiate Athletic Association (NCAA) made a regulation in 2005 to remove harmful “Indian” mascots. Even so, a poll performed by The Washington Post found that 90% of Native Americans were not offended by mascot names. School boards and team organizations mainly remove Native American names to avoid lawsuits.

A different example would be Washington’s football team deciding to no longer be called “the Redskins” because of its racist denotation. As of 2020, the team is being branded as “the Washington Football Team-” a name that provokes absolutely no reaction. It seems that many teams are making decisions to carefully avoid offending any groups. While the name “redskin” is unarguably a racial slur, it seems to have the Native American legacy completely taken away from the team.

Although Native American mascots can be offensive and culturally insensitive, Americans should be careful not to repeat past mistakes and should ensure that the Native American people are still celebrated in the United States.