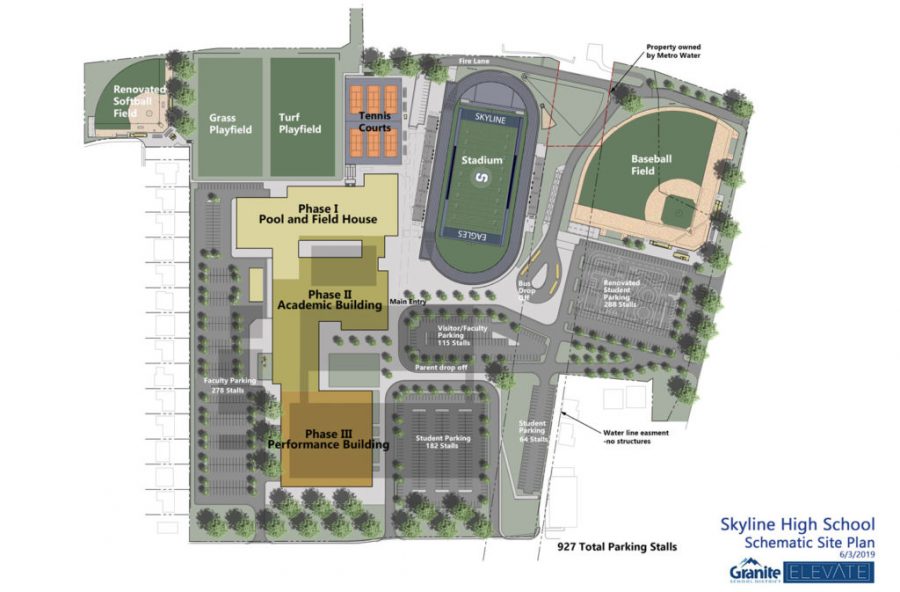 On Monday, November 18, Skyline High School began construction on their east parking lot. The majority of the student body uses this parking lot and left them with only half of the parking spots they previously had, half the drivers range, and the smaller west parking lot to use.

A fence was put up to create a clear boundary for the students, but has become a horrible hindrance.

The construction has taken away the northern parking spots, including one of the three entrances, forcing hundreds of students to cram through only two entrances.

The fence and the cramped parking spots makes it impossible to turn around without either having to back out the whole way or attempting to turn around, resulting in a 90 point turn, which takes a very long time and also congests the  rows and does not allow any car to pass through.

Due to this construction, the four way stop on the south side of the school has become more congested. The infamous four way stop has been notorious for taking an eternity,but the construction and limited points of entry have only increased this congestion. Students now have to arrive 10-15 minutes earlier than usual to fight for parking spots, and they aren’t allowed to park in the nearby neighborhoods.

The issue with the west parking lot is that there is only one entrance and exit. This means that at the beginning, end, and during lunch it is almost impossible to get out at a reasonable time. Tim Mundt, one of Skyline’s Assistant Principals revealed on the weekly announcements that tardies have drastically risen. The cause is unclear, but only two things have changed recently, the construction, and the weather.

Harmon states, “It’s really frustrating because it provides less space to park and there’s more clogged traffic.” She says, ”I used to be able to leave 5-10 minutes later, but now I need to get there earlier in order to find a spot.” Skyline has done little to combate student frustrations besides telling the students to “remain patient”.

Upwall states, “In order to not be late to first period I have to leave my house at 6:55. I live five minutes away, so I can’t even imagine what time students who live out of the boundaries have to leave.”

This statement provides a suggestion of possibly pitching a tent and camping in the lot in order to ensure your arrival on time. It may be cold, but an no more tardies.  Tim Mundt, one of Skyline’s Assistant Principals revealed on the weekly announcements that tardies have drastically risen.

The cause is unclear, but only two things have changed recently, the construction, and the weather.

Before school and during lunch it is critical that students are able to get to school on time. Having to leave lunch ten minutes early only leaves students with twenty minutes to get to lunch, eat, and get ready to leave. It is a part of the highschool experience to leave the campus for lunch and that experience is now limited by the construction.

Thankfully, sophomores will not be allowed to receive parking permits this year or next year according to Murdock.

This decision will greatly reduce congestion at the end of the year, but will not reduce the congestion that is already occurring. Not to mention the massive influx of furious sophomores that are already beginning to be incredibly spiteful.

The current Skyline student body will not experience the renovations. they only get to experience the construction.This leads to little motivation to deal with such inconveniences, but they have no choice.

Students can anticipate the baseball field and parking lot construction finishing in May of 2020, five months from now.