Rush Limbaugh Leaves Behind a Biased Standard for Political Commentating 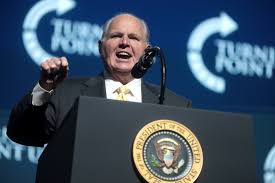 Rush Limbaugh, who passed away on February 17, will be remembered for his lasting influence on political commentating in the media by using a uniformly conservative approach, and being unafraid of sharply criticizing his interviewees

Rush Limbaugh was a pioneer of opinionated media. People who agreed with his beliefs loved his talk-show because they never had to hear the other side of an issue. Following Limbaugh’s lead, the rest of television news changed from factual presentation, equally representing each side of an issue, to an opinionated dissection of a topic, without care for whether or not people understood the full subject. Yet, people loved “Rush” (who they often referred to by first name). In an opinion article published on February 19, the Washington Post describes Limbaugh’s character: “His was the world around which it seemed to revolve. His authority to judge went unchallenged. His opinions unquestioned.”

Furthermore, Limbaugh fueled the country to become more divided. He embraced and empowered fake news. He was unafraid of making statements that were insensitive and degrading to many groups of people, not just politics.

He was inherently racist. People Magazine wrote, “If any race of people should not have guilt about slavery, it’s Caucasians. The white race has probably had fewer slaves and for a briefer period of time than any other in the history of the world” during The Rush Limbaugh show in 2013. The Washington Post reported him mocking the National Association for the Advancement of Colored People: “The NAACP should have riot rehearsal. They should get a liquor store and practice robberies.” People Magazine also made note of his racist parody song about Senator Barack Obama in 2007, that he called “Barack, the Magic Negro.”

He was also misogynistic. People Magazine reported his saying “feminism was established so as to allow unattractive women access to the mainstream of society.”

He was anti-LGBTQ. He deemed the the movement to legalize gay marriage as a “movement to normalize pedophilia,” as stated in The Washington Post.

Limbaugh was a denier of science. According to NBC News he claimed that smoking was not a big risk and that second-hand smoke involved no fatalities. Of course, that was before he died from lung cancer.

Unfortunately, Limbaugh’s audience wasn’t exactly small-scale. According to an article in the Boston Globe, “Limbaugh presided over a daily broadcast on almost 600 stations, reaching an estimated audience of 15.5 million” for thirty-three years. However, Rush has inescapably transformed the media.