Eagles Chip Away at Miners After Mercy-ing Colts 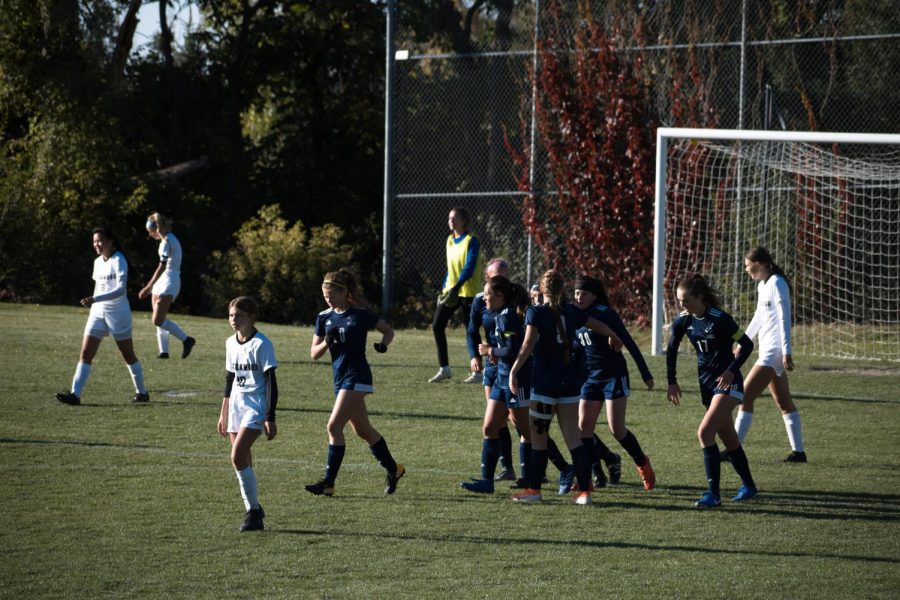 October 10 and 15 the Skyline’s Women’s Soccer team played their first and second rounds of playoffs. They won the first round 8-0 against the Cottonwood Colts and the second 3-2 against the Park City Miners.

Opting for a 4-4-2, Skyline’s play style focused on control of the midfield or “center third” for both games. For all of the Cottonwood game and the first half of the Park City game, the Eagles high-pressed—“marking” players to force a play—only the player with the ball: however, the “open” players were not marked and completely able to receive a pass. This fault in the hybrid defending allowed small mistakes to snowball into two Miner goals during the first half. The Eagles began fully high-pressing in the second half of the Miners game and were able to secure victory.

Both opponents had an overly timid style of play: the Colts tended to keep their midfield in a defensive position. They took very little initiative in defending and allowed the Eagle offense to string together 8 goals. Much like the Colts, the Miners held a defensive midfield; they made the same mistake as the Eagles by sending only a few players to press, but they did not fix this flawed defending at halftime.

Skyline’s control of the midfield allowed them to start many offensive scoring opportunities. They gravitated towards long, high passes which were received by one of the two forwards. Depending on the speed and number of defenders, the forward would either attack the goal line and cross the ball or they would directly attack the goal.

The Colts were unable to start more than about two attacks and both were easily stopped by the Eagle defense. The Miners were able to start a few attacks with the help of Skyline’s aforementioned small, snowballing mistakes, but most of these were cleaned up by the defense or the goal keeper.

The best soccer of these two games was during the second half of the Eagle-Miner game. Both Skyline and Park City changed their approach to the game at this point and, in fact, rather similarly. The Eagle began an effective high-press and the Miners tried an aggressive playstyle, but in vain. This half had many more Skyline opportunities, but the crosses were placed for a non-existent runner—no one was filling in the back channel.